Sylvester Bumann is my deceased father-in-law. He passed away at the relatively young age of 29 in 1958. Because he was in the Air Force for 4 years he was eligible for a military headstone. Here is the application that was filled out to acquire one: 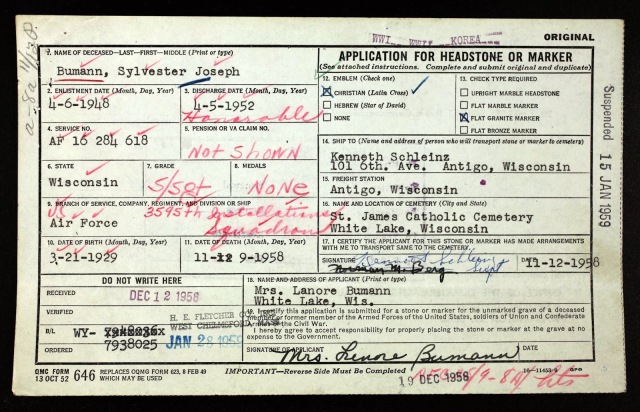 For those trying to find information on a relative’s military background, a document like this is an excellent resource. It gives his exact dates of service, his branch, company, regiment, etc. along with other vital information.

As I knew nothing about what an ‘Installation Squadron’ was I looked online and this was the best information I could find:

Engineering and Installations’s roots can be traced as far back as 1901 when the Army Signal Corps sent Lt. Billy Mitchell to string 1400 miles of telegraph cable across Alaska. In 1938, the Army Airways Communication System (AACS) was organized and was assigned directly under the Army Air Forces in 1943, which became part of the new US Air Force upon its creation in 1947. The USAF distributed the personnel and functions into five Installation and Maintenance Squadrons. Throughout the 1950s, the USAF was in its infancy and much of its infrastructure was still being converted from WWII era Army Air Corps Flying Fields into Air Force Bases.

So I believe that Sylvester was helping to modernize the Nellis Air Force Base in Nevada at the time of his service, as that is where the 3595th was stationed at that time. His background and knowledge of electronics is what put him there.

So to the Bumann Clan, enjoy!