On October 30, 1931 Clarence John was driving home from a long day at work at his bowling alley in Oconto. It was 11:30ish at night and pouring rain.

The driver of the motorcycle was Harvey, a 20-year-old, who was accompanied by a friend. Harvey lost a leg due to the severity of his injury. His father, acting as his guardian, sued Clarence for damages and the case was brought to Brown County Court in March of 1932, however there was a request to change the venue to Oconto County, which was consented to.

There were no witnesses to the accident other than the three people involved. The only testimony in the case is from Clarence. Below is a scan of the first page from the testimony. 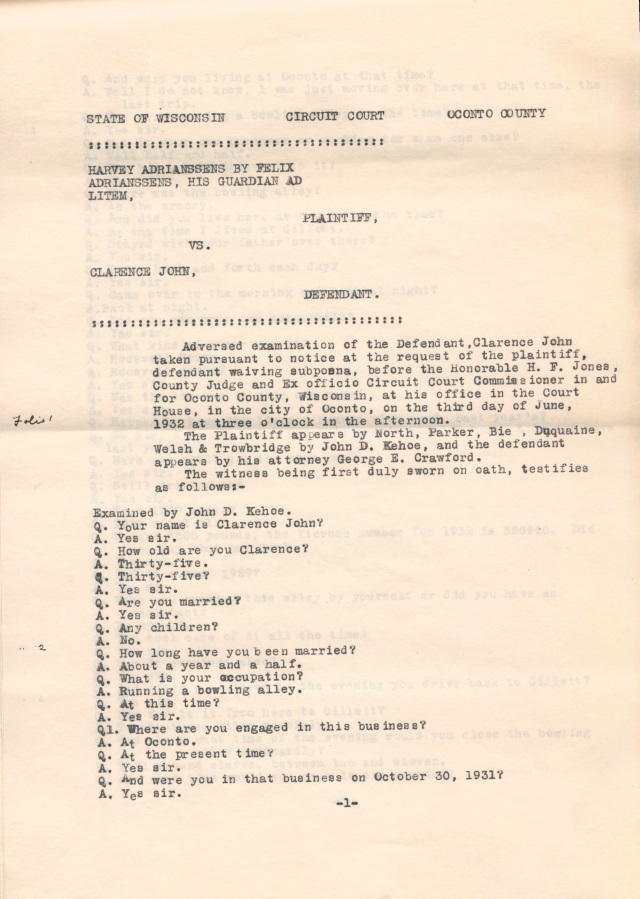 According to his testimony, he had half interest in a bowling alley in Oconto, at the armory, which he ran all by himself. He was living in Gillett with his wife, Myrtle, and his parents. They had no children at that time.

Clarence answered the suit against him with a definite ‘not my fault’, stating that the driver of the motorcycle was driving too fast for the conditions and lost control. Harvey’s lawyers and guardian denied the fault was his.

The damage that is visible on Clarence’s car does look like the other driver hit him, not the other way around. But in the end, we only have Clarence’s testimony, none from Harvey.

And, of course, no matter what we conclude seeing the evidence and reading the testimony, the jury’s opinion is the only one that matters. They found Clarence at fault, and ruled in favor of him paying damages of around $5100 for personal injuries sustained by the plaintiff. (If payment was for reparation for the loss of Harvey’s leg, it seems a bit cheap to me.)

The record, which consists of sworn affidavits of attorneys and the defendant, and the statements of counsel made in the record on this application, raises a serious question as to the truth of the allegations of the defendant in his affidavit. The plaintiff’s attorney at the time of the trial…swears that after the rendition of the judgment and for about nine years thereafter he industriously attempted to ascertain the financial condition of the defendant in Oconto and Forest Counties and that his investigation disclosed to his satisfaction that the defendant during that period was judgment-proof.*

From 1942-1948 no action or activity appeared to be going on regarding the collection of the debt. Until Harvey got impatient, and in 1948 started pushing for his money. Here is an excerpt from a letter from one lawyer to another regarding the matter, dated October 21, 1948:

I have checked with Findorff and they tell me that John terminated his employment with them sometime during the spring of this year. However, the motor vehicle dept. informs me that he has an automobile registered in his name – – -1936 Plymouth coach…residence being Crandon, Wisconsin.

Under the circumstances , there is no point in my filing the certified copy of the judgment, inasmuch as there is absolutely no chance of my garnisheeing his salary or having execution issued. In the event he is traced to Madison again, I will be happy to grab him by his pants. There may be a chance for you to have his car picked up if he has returned to Crandon.

This process continued until July of 1953. At this time Clarence was finally found in Wausau, and served, Harvey had made action to start the process of suing him, he was worried because the judgment would lapse in August of that year.

Clarence refused to show up in court, instead sending his attorney to file one paper which stated that since the judgment, he and his family had resided in Wisconsin all that time. They never received papers regarding the execution of the judgment, or even an attempt at communication, and that such in-action in all this time negates the ‘good cause’ requirements of the judgment. Basically, making it null and void.

But the lawyers for the plaintiff had this to say: 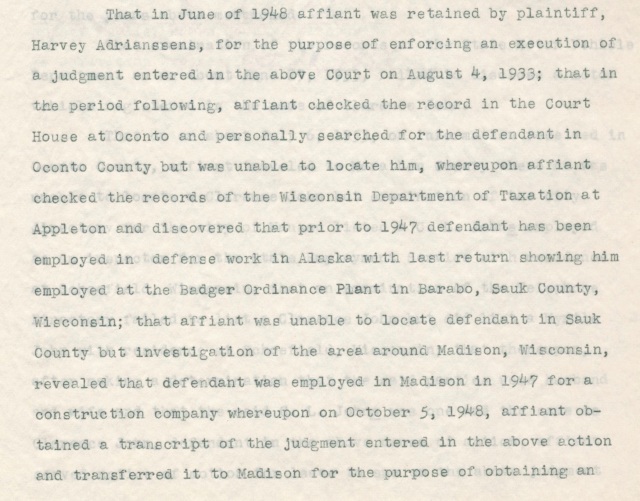 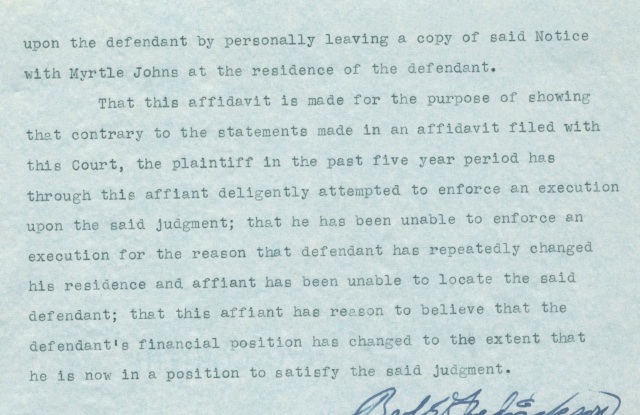 It looks like Clarence really didn’t want to pay this debt. But he never asked for an appeal to the judgment, which kind of makes his excuse a bit thin.

In the end all this work that Harvey put into getting his money came to nothing. My grandfather, Clarence, died in February of the next year, (1954). On his father’s birthday.