In my recent search of newspapers regarding the Brooks family of Cherry Valley, I found an article about David’s son Andrew*, (the only son to  follow in his father’s tinsmithing footsteps). He had apparently won a patent on a new kind of fastener for milk can tops. 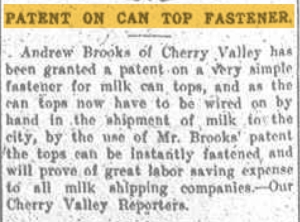 So below is the sketch of what the device looked like, along with detailed instructions on how it was suppose to work.

It is very likely that Andrew’s tin-smithing skills, and his experience working at the local dairy influenced this innovative design. There is no information on how successful this fastener was, so I don’t know if he got rich off of it.

This is the second relative of mine to have a patent. Dillon Hatch (husband of Almyra Brooks), together with two other men, applied for, and received, a patent on a door design in 1891 (which I wrote about in an earlier post).

Andrew and his wife Elizabeth had one child, a daughter Mary L. Brooks, who appears to have died in her early 20s, leaving no heirs. Which means there were no descendants around to brag about Andrew’s clever invention. Maybe this post will make up for that loss.