If the Shepard line of descent from William Shepard is true, then that means that my mother’s side of the family has two HART lines. [I could insert a Vulcan joke here, but I’ll refrain.]

The first is Edmund Hart, father of Experience who married our Shepard immigrant William, (and then divorced his sorry butt for desertion). The second HART line is on the Shaw side of the family through Deacon Stephen Hart of Farmington, Connecticut (crazy Esther Newell strikes again). As far as I have been able to discern, the two lines are not related.

According to the Genealogical History of Deacon Stephen Hart and his descendants…, by Alfred Andrews, Deacon Hart was born in Braintree, England about 1605 and arrived in Massachusetts Bay by 1632. We know next to nothing about the mother of his children, not even her name.

We actually descend from this line three times through the second generation of Harts:
1. Sarah who married Timothy/Thomas Porter
2. John who married Sarah Hawthorne
3. Thomas who married Ruth Howkins

John was the eldest son of the Deacon and his unknown wife. He married Sarah Hawthorne and they resided in Farmington, Connecticut until the family moved to Tunxis, where they were one of the first settlers there.

It was here that tragedy struck the John Hart family in 1666. Although the story has two versions.

According to the Genealogical History book mentioned above:
…his house, which was located near the center of the village, was fired in the night by Indians, and he and all his family, with the exception of his eldest son, John [about 11 at the time], who was that night at Nod, or Worthington, since called Avon, looking after the stock on a farm they owned there, perished in the flames.

Apparently, in the same fire, the town records were also destroyed. The story continued to say that the General Court tried to find the perpetrators of the crime among the Tunxis tribe but had no luck.

According to the online version of the same book with addendum, a researcher by the name of David Mauro published in the July/August 1997 issue of Hart Historical Notes an article showing that there were no Indians involved. A quote from the story from Dr. C. Pickford of the Connecticut Historical Society states:

“The 19th century accounts of Farmington contain a lot of fiction. Without any corroborating evidence to support Andrews’ story, I had to conclude that is was without substance.”

Andrews being the author of the original Hart book mentioned above.

There was further mention that a Rev.Samuel Danforth a pastor of the first church in Roxbury kept a diary where an entry appears on February 11, 1666:

“Tidings came to us from Connecticut how on ye 15th of 10M66 Sergeant Hart, ye son of Deacon Hart and his wife, and six children were all burned in their house at Farmington, no man knowing how the fire was kindled, neither did any of the neighbors see ye fire till it was past remedy. The church there had kept a fast at this man’s house two days before. One of his sons being at a farm, escaped the burning.”

It is by the will of the fates’ that Stephen’s grandson John was the only family member to survive this horrible incident. I can only imagine how devastating it would have been for him to lose his whole family, and at so young an age.

——–
Sources:
Genealogical history of Deacon Stephen Hart and his descendants, 1632. 1875 : with an introduction of miscellaneous Harts and their progenitors, as far as known; to which is added a list of all the clergy of the name found, all the physicians, all the lawyers, the authors, and soldiers, by Andrews, Alfred, 1797-1876; Hart, Austin: 1875 [archive.org]

The introduction of steamboats on the Ohio River in 1811 revolutionized river travel during the first half of the nineteenth century in America, and by the 1820s the Ohio was bustling with more boats than you could shake a stick at. Early travelers using the river for transportation spent much more time and energy getting from place to place because they had to power the boats themselves. This technology made travel on the water faster and more efficient. The only drawback was the steamboat’s tendency to explode, but this drawback was more than made up for with the speed they could achieve to meet tighter schedules, traveling against the current, and by being able to take more passengers and higher value cargo upstream.

Although most of the earlier steamboats came from Pittsburgh or Wheeling, it wasn’t long before Cincinnati also emerged as a significant player in the industry. “Cincinnati shipyards launched twenty-five steamboats between 1811 and 1825, and the number only increased after that period. The industry and the transportation system that it developed helped Cincinnati to become one of the most important cities in the West prior to the Civil War.”1

One of those early pioneers of this revolution in river travel was my 3x great Grandfather Stephen Goble, Sr.. Stephen was born in 1804 in Clermont County, Ohio the son of William Goble and Ruth Beck. He was named after his paternal grandfather. The lure of the Ohio River called to him, and one can easily imagine the appeal to a young man of the early 1800s, watching the hustle and bustle of the steamboats traveling up and down the Ohio at all hours of the night and day, with many heading to St. Louis and New Orleans. It must have been quite a sight to see.

The thrill of adventure was so alluring to Stephen, that at the age of 15 he had left his family in Bethany and eventually ended up working on the steamboats running the river. By 1826, at about the age of 22, he had become an engineer on the first two lever engine boat that started in Cincinnati, the Wm. Tell.3 I found the following wonderful news articles in the Ohio papers. They give us a hint of his early adventures.

River News, Daily Port Register. Arrivals. Personal.
Several weeks ago we noticed the death of Capt. Embree,…Capt. Embree was one of the earlierst steamboat captains in the west…In the year 1828 he built a boat at New Richmond, Ohio, on which such venerable steamboatmen as Captain John Conner, Robert Davis, and engineers James Temper and Stephen Goble, Sr. each served terms as youthful engineers.4

Shipping News: Miscellaneous —
Stephen Goble probably the oldest river engineer living, was here Thursday. He was on the Wm. Penn[Tell], the first two lever engine boat that started from Cincinnati, and also on the Marion the second of the same class. He is now 84[78] years old, hale, hearty and in possession of every faculty. He lives up the river near New Richmond, and made the trip on the Bonanza as the guest of his old frine Mac Ketchum. He was greatly interested in the changes that have occurred since his day.3

River Intelligence: Personal.
Stephen Goble, an old time engineer, was on the Wm. Penn, the first two lever engine boat, that started out from Cincinnati and also on the Marion, the second of the same class. He is now eighty-four years old, hale and hearty and in possession of every faculty. He lives up the river near New  Richmond.5

River Intelligence: Personal.
A correspondent at New Richmond writes us that the item in the Gazette a few days ago in regard to Stephen Goble was not altogether correct, he being in his seventy-eighth year. The Wm. Tell was the first steamboat he went out on as engineer from Cincinnati, in the year 1826.6

We don’t know exactly how long Stephen worked on the river as an engineer although one paper reporting his death indicated that he was involved with the river for over 40 years and other sources say until he retired, which could be at any time.7 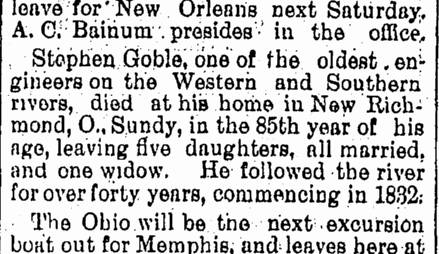 In the 1840 census he is listed as being engaged in agriculture, so he was probably involved with both occupations during his lifetime. He was now an adult and had settled down with his first wife with whom he had married in 1824, Elizabeth Brown. His second wife was Alice Brown (sister of Elizabeth), our ancestress, whom he married in 1841. She was about 14 years younger than him. Together they had five daughters of whom Sallie is my gg grandmother, and one son.

It is a pity that we can’t go back in time and relive Stephen’s river adventures with him. It must have been a thrilling time.